Verdict of medical misadventure at inquest into baby’s death 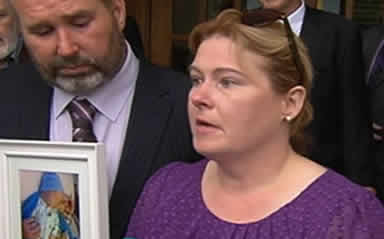 The jury at the inquest into the death of baby Conor Whelan at Cavan General Hospital over two years ago has returned a verdict of medical misadventure.

Baby Conor died on 14 May 2014, just over 17 hours after being delivered by emergency Cesarean section.

The inquest heard that his mother, Siobhan Whelan, had been suffering from an undiagnosed condition called vasa previa, where foetal blood vessels block the entrance to the birth canal.

The jury of seven women and three men recommended the introduction of a 20 week scan at the hospital and the appointment of an obstetric radiologist at the hospital immediately.

The jury also recommended an appraisal by the Health Service Executive of the obstetric unit at Cavan General Hospital.

Baby Conor’s parents, Siobhan and Andrew from Drumrora, Ballyjamesduff in Cavan, were in the Coroner’s Court as the verdict was returned.

Ms Whelan had told the inquest that her family’s life had been changed forever by the loss of their baby boy.

She said her family had fought to get answers and hoped lessons could be learned from Conor’s death.

Coroner Dr Mary Flanagan expressed her sympathies with the family on the loss of Conor.

General Manager of Cavan General Hospital Evelyn Hall also expressed her sympathies and apologised to the family and said all recommendations would be supported.

Speaking outside the Coroner’s Court, Ms Whelan said it has taken two-and-a-half years to get answers.

She said the verdict will not bring Conor back, but “his life mattered and his legacy in his short time with us will go on to hopefully prevent further unnecessary deaths”.

During the inquest hearing earlier today, a consultant paediatrician said that blood should have been given to baby Conor “sooner than we did”.

Dr Ann Katherine Leahy said it was not acceptable that it took 85 minutes to give the baby a blood transfusion.

Dr Leahy told the hearing the rate of transfusion also was not acceptable.

Dr Leahy said a number of medics tried to revive the baby after his birth but “he was limp, with no heartbeat”.

The consultant paediatrician said they managed to revive Conor after 20 minutes. He was then transferred to the Rotunda.

“We wanted to do everything we could”, Dr Leahy said.

She said she was not told any of the medical history of Conor’s mother, Siobhan Whelan, before the birth and she was not present for the delivery.

She told the inquest that a number of recommendations have since been introduced at the hospital, including blood transfusion protocol.

A consultant obstetrician from Cavan General Hospital who saw Ms Whelan during her pregnancy said he was not aware “at any time” that there was a question of a low-lying placenta.

Dr Azhar Syed was giving evidence on the third day of the inquest.

Dr Syed told the hearing that he reviewed Ms Whelan a number of times during her pregnancy but was not told of concerns about a low-lying placenta. He said he only found out about it in the weeks following Conor’s death.

He also told the inquest that following Conor’s death, radiologists at the hospital said they did not want to report on obstetric scans because they felt they were not skilled enough.

Under questioning from solicitor Roger Murray, Callan Tansey Solicitors, for the family, Dr Syed said he helped sonographers to report on scans and if there were concerns he reviewed the scans.

He also told the inquest the hospital does not have the staff to carry out a 20-week scan on pregnant women.

Yesterday, the inquest heard from Professor of Obstetric Radiology in the UK Dr Anne Marie Coady, who said it is much easier to see abnormalities in a 20-week scan.

Dr Syed told the inquest today the hospital had tried to recruit staff but had not been successful.

“The process is ongoing”, he said.

The pathologist who carried out the post-mortem examination on baby Conor told the inquest that he died as a result of multi-organ failure due to complications of birth.

Dr John Gillen, who conducted the autopsy, said baby Conor was deprived of oxygen due to pressure on the vasa previa, which led to the rupture of the vessels, causing him to lose blood.

Vasa previa is a condition where fetal blood vessels block the entrance to the birth canal.

Dr Gillen told the inquest that it was his opinion that Conor was alive when his mother arrived at the hospital.

An expert witness said that it is “likely” the breaking of Ms Whelan’s waters caused a rupture which resulted in the baby losing blood.

Dr Roger Malcolmson, a consultant paediatric pathologist based in the UK, told the hearing that he believed there had been acute damage to the infant, as a result of blood loss.