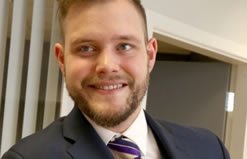 Johan Verbruggen knows a thing or two about the medical injury cases coming across his desk in his work as a lawyer, having been injured at birth himself.

Some of the cases he handles involve the very same injury he suffered when his mother, Mary Verbruggen, gave birth to him just after Christmas 1989.

Mr Verbruggen, from Oughterard, Co Galway, has Erb’s palsy, essentially a withered arm, which is the result of complications during his birth in the then Galway Regional Hospital.

Erb’s is often caused by a difficult birth when a baby’s shoulder is trapped behind its mother’s pelvis and fragile nerves in the child’s neck and arm become overstretched or torn.

“I showed no clinical signs of life when I was born,” he says. “My Apgar score [a test for vital signs in a baby] was zero after 10 minutes; I should be profoundly mentally handicapped. The paediatrician saved the day, and got my heartbeat back.”

Most people with Erb’s make a full recovery within months of birth, but Mr Verbruggen was left with a right arm that was shorter than his left.

His right arm is “essentially useless”, he says, four inches shorter than the other and capable of pincer motions only.

Encouraged by his family, he retrained his left arm as the dominant one, overcame a stammer and enjoyed as normal an upbringing as possible.

“My childhood was relatively carefree but self-awareness set in during adolescence. I couldn’t do GAA, hurling, rugby, boxing – basically, any sport that required two good hands. I did try, but not even the kindest manager could overlook my issue. And so I was angry about this, at some stages.”

His mother set up the Erb’s Palsy Association of Ireland, and quickly found that far from being a unique case, as she had been led to believe, her son was one of hundreds with the condition.

After a five-year legal battle, Mr Verbruggen was awarded €225,000 under a settlement agreed in the High Court in 1996. The family had argued that Ms Verbruggen’s labour should have been more intensely monitored and a Caesarean operation performed. The case was settled without an admission of liability after the hospital and the obstetrician involved denied any negligence.

He grew up in the shadow of his mother’s negative birth experience.

“They were told it was their own fault, that I was the only one with this condition in the country,” he says. “Cobwebs were constantly put in front of them. I suppose it fed into my own concept of justice, that I was never given an apology.”

Mr Verbruggen’s condition closed off the option of becoming a vet, like his father. “It really came down to a desk job, and the natural thing was to do the job that helped me after my birth.”

While always interested in law, he remembers Prof Deirdre Madden’s 2008 report on patient safety, with its call for open disclosure where medical mistakes occur, as a real eye-opener.

“I remember thinking back then, ‘why isn’t this the de facto position anyway’?”

“Despite the hard work undertaken by the commission [led by Prof Madden] in coming to its findings, voluntary open disclosure was only introduced in June 2018, amid the groundswell of outrage about the issue in the context of CervicalCheck. We still don’t have mandatory open disclosure, 11 years on from the report, and despite the Trojan efforts of Vicky Phelan.”

In 2014, after college and a spell working in a phone shop, he secured a job in Callan Tansey in Sligo, one of the half dozen or so legal firms in the country with a speciality in medical negligence.

A decade on, he says, it’s still a fight to get some doctors to discuss adverse events with patients at the time of the event and afterwards.

“If they had told Mum I had Erb’s palsy when I was born, my parents wouldn’t have so passionately gone down the court route.”

In his work, he says he sees “awful things – notes and consent forms doctored, cover-ups, poor bedside manners. But a good proportion of things coming over my desk is just a suspicion by patients they haven’t been told anything, and often we can help clear this up and we find everything has been done by the book”.

Medical injury lawyers are often derided, and not just by the medical profession, as “sharks” and “ambulance-chasers”. It’s not a characterisation Mr Verbruggen is prepared to accept.

“I do have sympathy for doctors; my dad was a professional himself. My parents didn’t chase any ambulances. I’d give back every cent I got if I could have my good arm back. The time spent on appointments, the sports I could never play – I’ll never get this back.”

“I don’t have any time for solicitors who take cases that have no merit. But it’s only by finding out what happened that you can establish whether a person has a case. And patients are much more clued-in than they used to be,” he says.

“When negligence is discovered from an objective analysis of the records, the patient/client is still made to fight all the way to the steps of the court to extract any acknowledgement of, or contrition for, even the most blatant medical errors.”

He is hopeful of meaningful change with the forthcoming Patient Safety Bill and Mr Justice Charles Meenan’s plans for legal reform in the area.

“From my perspective as a medical negligence victim turned medical negligence solicitor, though, the main issues with both the health system and the litigation process are the same now, as they were for my parents and I, 30 years ago.”