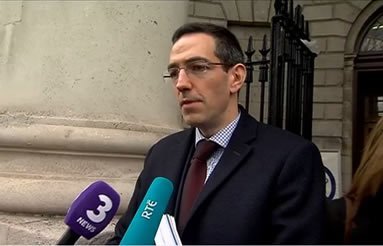 View Roger Murray, Solicitor for the family’s case outside the Four Courts on RTE News.

The family of a nine-year-old Sligo schoolboy has been awarded €5m in a settlement over the circumstances of his birth at Sligo General Hospital in May 2009.

The settlement for Kyle Carpenter, who has cerebral palsy, was made without an admission of liability. It was achieved through mediation and was approved by the High Court.

The family’s solicitor Roger Murray said afterwards that mediation should be the way forward for the State in such cases.

He said the family had achieved the same outcome through mediation as they would have through a long, drawn-out court battle.

Mr Murray said it had to be a signal as to how things should be done, especially in complex, emotional cases or cases involving children.

He said mediation diminished stress considerably, adding that Kyle’s parents, Michael and Lisa, wanted to add their voices to calls on the State to settle these cases early and use mediation instead of putting families through further trauma.

He said this case was an example of how the State should be dealing with traumatised families, especially “in the week that has been in it”.

Mr Murray added that the State should not always be reactive in such cases but should carry out its own inquiries.

He said the State should not be waiting for lawyers to write to them on behalf of families.

There should be an open duty of candour on doctors to report incidents where harm has been caused, he said.

The settlement was approved by Mr Justice Kevin Cross.

The court heard the case was very complex and had it gone to a full hearing, the outcome for the family would have been uncertain.

The court heard Kyle was in a mainstream school and his mother said he was doing well “despite all his challenges”.

Mr Justice Cross thanked Mr and Mrs Carpenter for caring for their son and said the money would give them reassurance that his future needs would be looked after.

He approved a payment of €255,000 for expenses to date and also for money for what he said would be a “well deserved” family holiday.