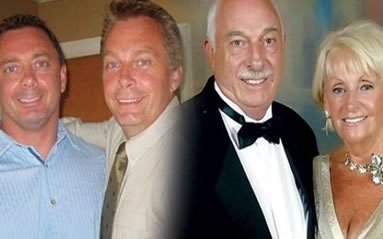 (pictured Steve Alexander (left) his brother Doug jnr and their parents Doug and Lily died in a collision on the N25 Rosslare to Cork road near New Ross on December 4th, 2017).
There was nothing a lorry driver could have done to avoid a road traffic collision in which four members of an Irish-American family were killed while performing a U-turn in Co Wexford a little over a year ago, a coroner has said.

Verdicts of accidental death were recorded at the inquest into the deaths of Lily Alexander and her husband Douglas Alexander Snr (both aged 75) and their sons Douglas Jnr (52) and Stephen (49) in a crash on the N25 Rosslare to Cork road at about 6.25pm on December 4th, 2017.

The four, who lived in Chicago, were catastrophically injured when their BMW rental car collided with a 40ft articulated lorry at Begerin Hill, 5km east of New Ross, after Douglas Jnr performed a U-turn on the road. The driver and two others in the vehicle were not wearing seat belts.

The family had had flown into Dublin Airport that morning to attend the funeral of Lily’s sister, Winifred (Winnie) Keevey at Cushinstown Church, about 1 km from the scene of the collision.

The Alexanders met relations Oliver and Mary Prior at the airport and travelled to their home in Tallaght where they rested for a period before travelling to Wexford.

The inquest was held at the Brandon House Hotel in New Ross, where the Alexanders and Priors had dined prior to the crash. They then left the hotel in convoy to go to the church.

Mr Prior said Mrs Prior told him he had missed a turn as he climbed Begerin Hill on the road to Wexford. He said there was plenty of room on the roadside so he decided to pull in.

“I could see the Alexander car right behind me. I decided to turn around even though I knew we were going the right way. I had a good view towards Wexford and there was no vehicle coming from that direction,” he said.

Mr Prior pulled out onto the N25 and completed a U turn and when he looked towards New Ross he could see the lights of a vehicle [the truck] in the distance.

“As I pulled out that was the last time I saw the Alexander family. I was still in first gear when I heard the bang. I knew the truck had hit the Alexanders as it could be no one else.”

Paul Caulfield, the truck driver, said he was on his way from Youghal to Rosslare where he planned to catch a ferry to Pembroke in Wales. He described the road conditions as “greasy” at the time.

“As I came down the hill I just remember a car shooting in front of me. I didn’t get a fright as I could judge the car was safe enough from me to move on,” he said. “Then all I saw was lights and then we hit. I slammed the brakes and we went across the central reservation.”

Mr Caulfield was thrown to the other side of the cab and climbed out of the driver’s window to phone the emergency services.

Kevin Collins, a passenger in the lorry, said he noticed a car “foolishly” performing a U-turn on the hill and recalled Mr Caulfield saying ‘Jesus Christ’ as the BMW pulled out in front of them and was hit side on.

Grace O’Sullivan, a nurse who came across the crash scene, went to the BMW and checked the four Alexanders for a pulse, but could not find one. The air-bags had deployed and she noticed a woman wearing gloves in the back seat.

“The lady was getting cold and there was no question she was dead. There was a man lying face down on her lap and he was as cold as her.”

She said the only person wearing a seatbelt was Stephen Alexander, who was a decorated police officer with Bolingbrook Police Department in Illinois.

Forensic collision investigator Garda Tom Bolger said the BMW was hit “full on frontal by the truck right across the two doors”. He said tachograph records showed the truck was travelling at 70km/h, 10km/h below the speed limit.

Garda Bolger said an investigation reconstruction showed Douglas Alexander Jnr had an adequate view to see the oncoming truck. “The first view would have allowed the car to clear the path of the Scania truck safely.”

County Wexford Coroner Dr Sean Nixon, who heard the dead driver had no alochol in his system and there was no evidence of him holding a mobile phone, recommended a verdict of accidental death in each case, which the jury agreed with.

Dr Nixon said there was no evidence that Mr Caulfield was responsible for the accident, describing it as a tragic case.

He said the driver of the car would have been at a disadvantage having only arrived over from the US that morning and would not have had much rest. He added that due to being used to driving on the other side of the road, he may have expected traffic to come from the left rather than the right.

For other news articles relating to the above, see:
Irish Examiner Report
RTE.IE Report
Irish Independent, Jan 11, 2019 by Ralph Riegel