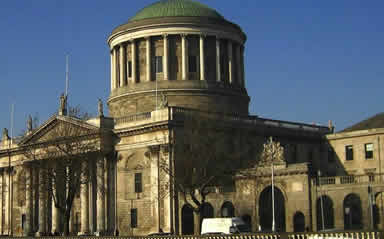 A WOMAN found by the High Court to have been sexually abused as a child for seven years by her Irish dancing teacher must be paid €50,000 out of the €400,000 award made against him earlier this week pending an appeal to the Supreme Court, a judge has ruled.

His victim, Dana Doherty (42), a schoolteacher from Letterkenny, had earlier this week asked that he be named and the case was put back until yesterday for both sides to make submissions on that.

Mr Justice Ryan, who made the €400,000 award on Tuesday, said he saw no legal or other reason why the parties should not be named but he deferred a final ruling until yesterday afternoon after being asked by counsel for Mr Quigley for an opportunity to appeal the naming aspect of his ruling immediately to the Supreme Court.

Mr Justice Ryan was told an appeal against the award was also to be lodged but the judge said he would grant leave for an appeal only if €50,000 of the €400,000 was paid to Ms Doherty.

Later in the afternoon, the Supreme Court ruled there was no basis in law to prevent Mr Quigley being named and when the matter came back before the judge, he ordered that his earlier written judgment, which had blacked out Mr Quigley’s name, should be re-issued in unedited form.

In a statement afterwards on behalf of Ms Doherty, her solicitor Brian Gill said she hoped the relevant authorities in Irish dancing circles, on hearing her story, would ensure all necessary steps were taken to protect children under their care.

By taking this civil action, Ms Doherty had at last had her voice heard and she was eternally grateful to two fellow Irish dancers who came forward to corroborate her evidence, he said.

“Together these three brave women stood together to release the truth. Now the truth has finally come out, Dana’s hope is she can let go of her painful past and look forward to the future,” Mr Gill said.

Earlier, in opposing the naming of Mr Quigley, Desmond Murphy SC, said if his client succeeded in his appeal, irreparable damage would have been done to his reputation by having him named at this stage. Naming Mr Quigley would also affect his wife and children, who lived in a small country town, counsel said.

Mr Murphy also said, in relation to payment of the award, Mr Quigley did not have money and was retired from his full-time job.

Eanna Mulloy SC, for Ms Doherty, said his side had learned Mr Quigley had transferred ownership of two houses in Letterkenny to his wife Alice’s sole name in 2005, including the family home. Mr Mulloy also said his client wanted him named.

Mr Justice Ryan said while he sympathised with the man’s family, he was not sure he had to take into account people who were not party to the action.

There was no perfect way of dealing with this matter but he believed fairness weighed in favour of the victim that he should be named. The judge also granted costs against the defendant.

During the case, the court heard Mr Quigley underwent two criminal trials in Letterkenny on indecent assault charges but in both the juries were unable to reach verdicts. The Director of Public Prosecutions later entered a nolle prosequi in the case.