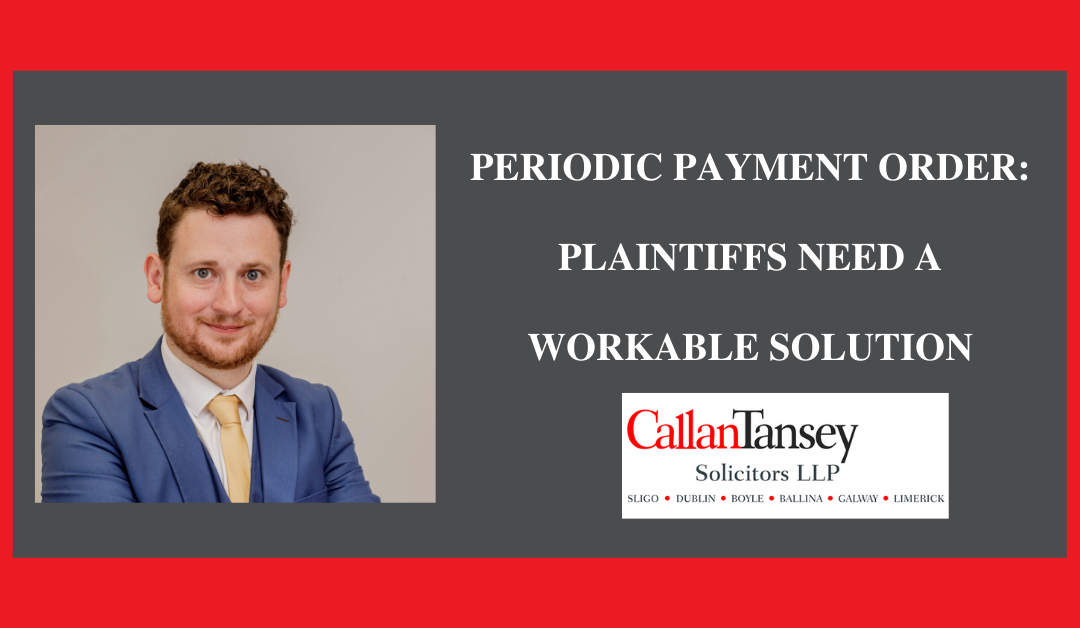 The requirement for plaintiffs in catastrophic injuries cases to return to court time and time again seeking interim payments is cruel and unfair according to David O’Malley, Partner at Callan Tansey Solicitors. This could be avoided if legislation was amended to provide a workable Periodic Payment Order.

Speaking at the third interim payment for Ruby McCandless Mr. O’Malley said “ the current system requiring families to return to court every few years urgently needs reform. This is the third occasion the McCandless family have been dragged back to Court. On the first interim settlement we were advised legislation was being drafted, last time nearly finalised and now eight years later it is completely unfit for purpose and as one Judge has described, a dead letter.” 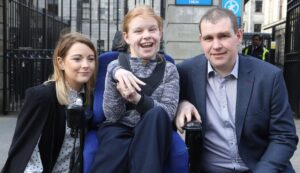 Ruby is a sixteen year old girl from Donegal. She has diskinetic cerebral palsy and will require lifelong care. In a case brought by her mother, Chrissie, in 2014 it was claimed she suffered her injuries as a result of her mother not being referred to hospital with symptoms of pre-eclampsia. The High Court at that time approved a settlement including an interim payment of €1.45m to cover Ruby’s care until 2018. The family returned to court again in February 2018 where a further interim payment of €1m for another four years. The family once again had to return to court in May 2022 seeking a further interim payment.

At present there are two options open to plaintiffs seeking damages for catastrophic injuries.  They can choose to receive a Lump Sum or a Periodic Payment Order. Neither option offers a suitable solution.

In the case of lump sum payments the costs of future care and medical treatment are hard to quantify. A plaintiff cannot be certain of how long they will live, or the level of care required during their lifetime. This means they run the risk of running out of money at some point whilst still requiring a high level of care.

Plaintiffs and their families often need to return to court again seeking interim payments to ensure they can afford the care required. This requires court applications at each interim stage, demanding submissions on the plaintiff’s progress and costs of treatments. An arduous requirement that plaintiff’s and their families may endure several times.

Periodic Payment Orders are index linked and paid to the plaintiff annually for the rest of their lives. The 2017 Civil Liability Act linked these payments to  the Harmonised Index of Consumer Prices (HICP), in other words they are linked to inflation.The current indexation of periodic payments in cases of catastrophic injuries claims could result in significant under compensation of care costs.

In other jurisdictions periodic payments are linked to wages rather than inflation.  One of the most significant costs of providing adequate care for people who have suffered catastrophic is wages, paying for nursing care and general care. As wage increases generally outpace the rate of inflation the current system is flawed.

By linking to inflation rather than wages the plaintiff runs the risk of under-compensation, and the rate of under-compensation grows the longer they live. In the 2019 case Hegarty v HSE evidence was submitted that calculated the probability of a shortfall of up to 52% of the plaintiff’s annual care costs at the age of 50, should a Periodic Payment Order linked to the HICP be applied.

Legislation needs to be amended

Under the Act the only indexation that courts are permitted to apply to Periodic Payment Orders is the HIPC. Only the Minister for Justice can specify an alternative index. The Minister, Helen McEntee, has said she does intend to bring forward the necessary legislative amendments enabling her to make regulations to the indexation rate. “This must now happen as a matter of urgency,” says Mr. O’Malley, “as the current indexation system is not in the best interest of plaintiffs. I urge Minister McEntee to immediately remedy this unworkable legislation to ensure that it is index linked to wages rather than inflation which currently stands. Only then can we see certainty for all parties”

In the case of Ruby McCandless the granting of a PPO linked to wages would eliminate the need for the family to return to court every few years for another interim payment. It is vital that the indexation of Periodic Payment Order’s be changed to ensure that the future care needs of those who suffer catastrophic injuries are fully covered by the payments.