Man awarded €1.1m for wrongful arrest by gardaí over attack on fiancee 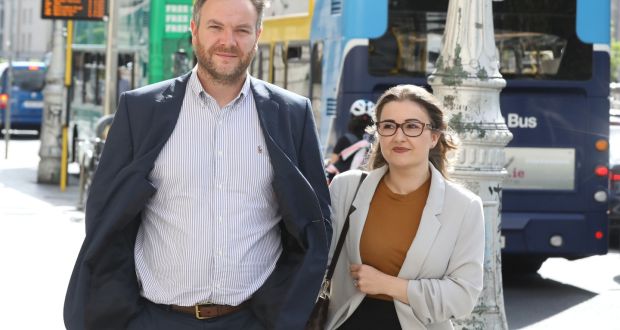 A man who was wrongfully arrested the same night his fiancee was savagely beaten by another man in a random street attack has been awarded more than €1.1 million by a High Court jury.

Gerald Jennings (34), a property manager and former minor footballer for Carlow, sued the Garda Commissioner and the State over his arrest on December 2nd, 2012, in Carlow town.

It was claimed gardaí wrongly suspected him of having attacked his fiancee Martha Kowalczyk when in fact it was carried out by Colvin Keogh (26), a student from the Paddocks, Carlow, who was later jailed for seven years for assault causing serious harm and sexual assault.

The State denied the claims and said reasonable force was used to detain Mr Jennings, who resisted arrest.

Following a 11-day case, the jury found the actions of gardaí were not reasonably necessary for the purpose of effecting a lawful arrest of Mr Jennings in good faith for the offences of breach of the peace and being drunk and disorderly. They also found his detention was unlawful.

A stay on the award was granted in the event of an appeal on condition that €150,000 is paid to Mr Jennings. He was also awarded costs.

The jury of six women and five men, reduced to 11 after one juror had to go on a pre-booked holiday because the trial went over the scheduled five days, deliberated for nearly 6½ hours over two days.

Mr Justice Bernard Barton thanked them for their service, discharged them and said they would not have to serve on a jury again for another 10 years.

In a statement through his solicitors, CallanTansey, Mr Jennings said the verdict “sent a strong message to the public that the high standard of conduct expected from our gardaí was not met in this case.

“Those who enforce the law must keep it.

“However, Gerald acknowledges that, in the main, we are well served by our gardaí and hopefully the necessary lessons from this case will be learnt”.

Mr Jennings’s “abiding wishes” are that what happened to him at the hands of gardaí will never happen again to him or to any other citizen and that he, his fiancee Martha, and their son Lawrence, along with both their families “can finally put this painful experience behind them and move on with the rest of their lives”.

The court had heard that as a result of his treatment at the hands of gardaí, including being pepper sprayed in the eyes three times, Mr Jennings was diagnosed with post-traumatic stress.

The incident arose following the garda call to deal with the attack on Mr Jennings fiancee, beautician Ms Kowalczyk.

She refused to go to hospital in an ambulance until gardaí checked on Mr Jennings first. She feared her attacker had got the keys to her apartment where a short time earlier she had left Mr Jennings sleeping.

Mr Jennings said his “nightmare” started when he was woken at the apartment by three gardai,who asked him to go out to see his girlfriend who was sitting in the ambulance. Sgt Theresa Phillips began to caution Mr Jennings as to his right to remain silent after one of the other officers noticed a handbag which the gardai understood from Ms Kowalczyk had been taken in the attack.

Mr Jennings, who gardaí said was drunk and abusive, demanded to know what was going on. He went out on to the street, he was pepper sprayed, handcuffed. He denied he was abusive or aggressive.

Before he was put into a garda van, Sgt Phillips said to him: “You may hit your girlfriend but you won’t hit me”. He claimed she actually said: “That’s what you get for beating your girlfriend, you dirty scumbag.”

At Carlow Garda station, he said he was twice taken into the station yard to have his eyes washed out with a hose in temperatures of minus two before he was put into a cold urine-stinking cell still wearing his water-soaked shirt.

Later, when his sister arrived at the station, at which point he had learned gardai knew the man who attacked his fiancee had been wearing different trousers to him, he sought an apology from Sgt Phillips for the “dirty scumbag” remark. He said she replied: “You are the real hero, always thinking about yourself all the time”. She denied this conversation took place.

Ms Kowalczyk told the court she repeatedly told gardaí she did not know her attacker but that they told her as she sat in the ambulance she should “admit my fiancee did it and it was not right to try to protect him”. Gardaí denied this.

When she got to Kilkenny Hospital, staff refused to accept her wish that Mr Jennings be recorded as next of kin.

Ms Kowalczyk broke down crying when giving evidence of the assault which was captured in its graphic and shocking CCTV footage shown to the court.

Mr Jennings sister, Catherine, told the court when she went to the Garda station to see her brother, Sgt Phillips asked had Gerald ever been violent before and spoke about domestic violence, that nine times out of 10 it was the boyfriend who was the perpetrator.

Sgt Phillips believed Mr Jennings was still the main suspect in the the attack up to 24 hours later, the court heard.