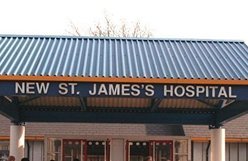 A verdict of medical misadventure was returned at the inquest of a man who had surgery for an aortic aneurysm.

Doctors operated on Colm Nolan (67) from Belgard Heights, Tallaght, Dublin as his aneurysm had grown and was at risk of rupture. Family said Mr Nolan was discharged from St James’s hospital on March 18, 2017, 10 days after the operation, with a prescription and no after-care advice.  He had a follow-up outpatients appointment at St James’s six weeks post-surgery but died on May 8 after he was admitted by ambulance to Tallaght Hospital.

Moira Nolan cared for her husband at home and said he lost a lot of weight after the operation.

“He was not himself at all. He lost a lot of weight. He didn’t want to go outside the door anymore,” she said.

Vascular Surgeon Mr Prakash Madhavan performed the surgery and described it as straightforward.

“It was the most straightforward of operations I can remember,” he told Dublin Coroner’s Court.

Barrister for the family Doireann O’Mahony instructed by Callan Tansey Solicitors asked Mr Madhavan if the risk of graft infection was discussed with the patient.

Mr Madhavan replied that he wasn’t sure but said all surgery carries risks.

A graft was stitched in place during surgery and blood loss was described as minimal.

Six weeks after surgery on April 15 Mr Nolan collapsed at home. He was admitted to the emergency department at Tallaght Hospital with gastrointestinal bleeding.

He was resuscitated and during surgery that evening, a fistula was found to have developed between the aorta and the duodenum.

The graft was found to be infected. He was placed on multiple antibiotics and monitored in the intensive care unit.

On April 28 he developed a leak of gastrointestinal content from his abdominal wound.

His condition deteriorated and he died on May 8, 2017.

A post-mortem report gave the cause of death as multi-organ failure due to sepsis due to the opening of the duodenal patch following surgical removal of the infected graft and repair of the fistula.