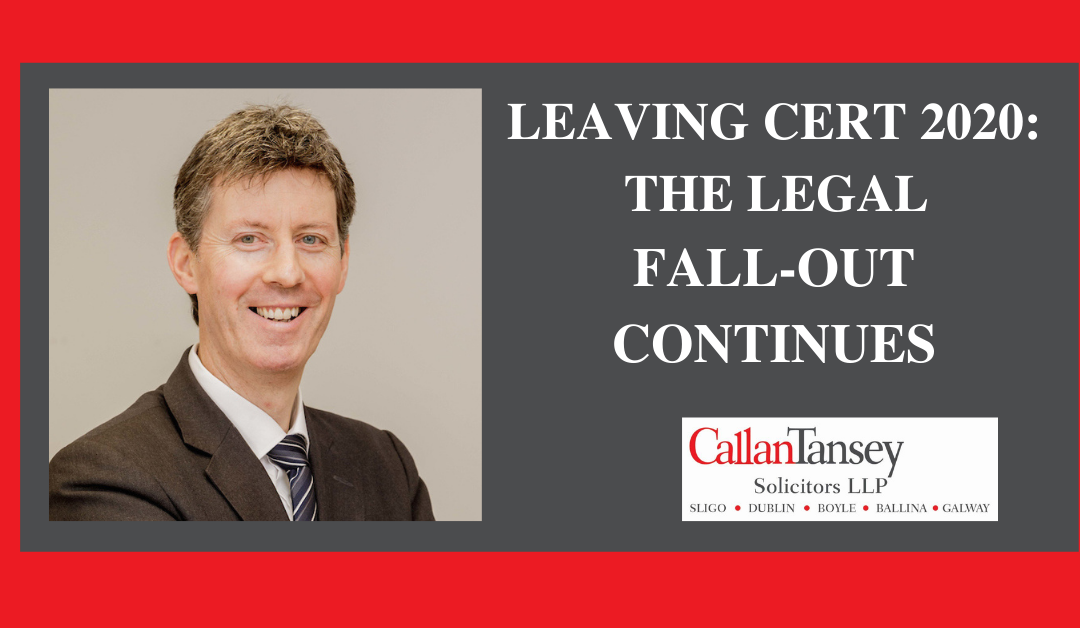 In the last few weeks, we have seen the Courts issue two significant judgements in relation to discrete issues that arose from the controversial calculated grades system that was applied to the beleaguered Leaving Cert class of 2020.

On 2 March the High Court rejected the challenge brought by Freddie Sherry against the standardisation model that was sanctioned by the Minister for Education and applied to the estimated percentage marks awarded by teachers to last year’s Leaving Cert students. (Sherry v Minister for Education & Skills & Ors. [2021] IEHC 128.

Mr. Sherry had claimed that the model had unfairly and unlawfully reduced his estimated percentage marks and had left him with final calculated grades that deprived him of his course of choice in university. His case was the selected lead case from a cohort of approximately 60 similar cases.

Separately the Court of Appeal returned its decision last week in two related “home-schooling” cases – involving two students – Elijah Burke and N.P. (not named as she was legally under the age of 18) both of whom had sued the Minister for Education & Skills in the High Court.

These two students were “home-schooled” and had challenged the calculated grades system which was devised in such a way as to prevent them from having their work assessed and graded. They were effectively “locked out” of the calculated grades process which the High Court had concluded was a breach of their constitutional rights.

Neither had claimed a right to a specific grade or a right to a third-level education but rather that the Minister ought to have had in place an arrangement whereby their work could be assessed independently to determine if a calculated grade could be awarded in each of the relevant subjects. There were no such arrangements in place and they suffered disproportionately as a result.

As can be seen from its comprehensive 124-page Judgement, much of the proceedings before the Court of Appeal was taken up with the weighty issue of justiciability. In layman’s terms this is a concept that concerns itself with whether or not a particular issue lies beyond the reach of the Courts.

The Minister argued that the calculated grades system which she had sanctioned back in May 2020 was a clear example of a policy decision consequent upon the exercise of executive function attracting a high presumption of constitutionality and as such was the very type of decision that fell within the four corners of Article 28.2 of the Constitution and as such was not justiciable by the Courts.

“The executive power of the State shall, subject to the provisions of this Constitution, be exercised by or on the authority of the Government”

This power extends beyond “lofty” matters such as foreign policy and international relations and into areas such as the operation of non-statutory schemes.

The Court of Appeal stated that Judges “are not elected and should not be involved in the type of decision making that is reserved for the elected representatives of the people”.

The Minister had argued that the primary test (of justiciability) was that which was applied in cases such as Boland v An Taoiseach [1974] I.R. 338; Crotty v An Taoiseach [1987] and T.D. v Minister for Education [2001] 4 I.R. 259], i.e. that the Courts had no role at all to intervene in policy decisions by the Executive save in the most exceptional circumstances where it could be shown that the Executive had acted in “clear disregard” of the Constitution. In fact, it proposed that the Courts should only intervene where the was a “conscious disregard”.

The Court described this as a “reasonableness test infused with proportionality considerations when constitutional rights are in the balance”.

Having reviewed the caselaw on the justiciability issue; assessed whether or not constitutional rights were at play and determined the appropriate judicial review test to be applied to the facts, the Court of Appeal reached the following conclusions:

As home-schooled students, the Respondents belonged to a small, confined category of students who were adversely affected by the calculated grades system thereby limiting any “floodgate concerns”. This, coupled with their total exclusion from the Scheme, were undoubtedly factors that worked in their favour

By contrast, Mr. Sherry belonged to a far larger cohort of students who were not excluded from the “new” system but were simply unhappy with how it was applied to him and these factors may go some way to understanding the High Court’s decision in his case.

If you have any questions regarding the issues in this article please contact Brian Gill, Partner, Callan Tansey Solicitors LLP at BGill@callantansey.ie.