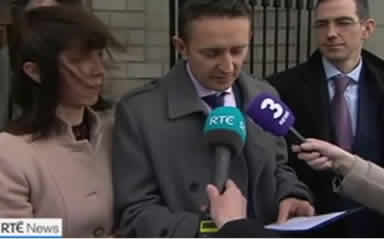 The HSE apologised today to a 6-year-old girl with cerebral palsy over the failings in her care after her birth at University College Hospital, Galway.

A letter of apology on behalf of the HSE and hospital management and staff was read out as Sadhbh Farrell settled her legal action with an interim payout of €2.66million.

Mr Justice Kevin Cross was told that the baby appeared jaundiced in the days after her birth in January 2011 and this should have triggered a simple test, which could have rectified the situation for the baby within a day.

The apology written by the Galway  hospital general manager Chris Kane sincerely apologised to the Farrells for the failings in care provided to Sadhbh in the week following her birth on January 23 2011.

Sadhbh Farrell, Killeeneen, Craughwell, Co Galway had through her mother Niamh Farrell sued the HSE for negligence arising from the baby’s discharge for University College Hospital, Galway without investigation for jaundice.

The case centred on the failure to carry out a test for the level of bilirubin levels in a baby who was jaundiced.

It was claimed there was a failure to have regard to the visible jaundice affecting the baby prior to her discharge from hospital in January 24, 2011 and a failure to have a proper clinical assessment of the jaundice and breaching the standard of practice in failing to, have objective measure, net of bilirubin levels in a baby who was clinically jaundiced.

Mr justice Cross was told that liability has been admitted in the case.

Senior Counsel Des O’Neill said the baby showed signs of jaundice and this should have triggered a simple test but it was not done.

On 31 January 2011 she was referred to the Emergency Department of University Hospital Galway and test showed high levels of bilirubin.

Approving the settlement Mr Justice Cross said he knew it was an awful thing to have happened to Sadhbh in the first few days of her life. He said it was a good settlement and he hoped it will take care of her physical needs for the next five years. The case will come back before the court in 2022 to decide on Sadhbh’s future care needs.

“Sadhbh is the baby of our family and she is adored by us all. She is a beautiful, bright and very determined little girl whose smile lights up our world. Her birth on the 23 January 2011 was one of the happiest days of our lives.

“The failings in Sadhbh’s medical care in the days following her birth will restrict her ability to live out every aspect of her life, to fulfil her dreams and the dreams that we had for her when she was born.

“The interim settlement we have reached today will never remove our ongoing grief for the independent life lost to Sadhbh, but will now help our little girl get the care and support needed to have every opportunity to live as full a life as possible.

“We would like to thank everyone involved in the care of Sadhbh over the past 6 years, especially, our families, neighbours and friends for their continued support to all five of us.

“We would like to thank our Legal team at Callan Tansey for their guidance over the course of the case.

“We would kindly ask that you respect our privacy as a family.”