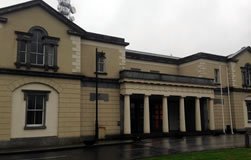 The inquest into the death of a man, following a workplace accident in Mayo, has been adjourned, after the company owner failed to turn up for scheduled proceedings today.

Joseph Harrington died when he fell into a stone crusher at Harrington Concrete and Quarries in Aghamore, near Ballyhaunis in June 2015.

When the inquest opened this morning, it emerged that the quarry owner, Frank Harrington (no relation to the deceased) was not present.

Mayo Coroner, Pat O’Connor, was told gardaí had made a number of attempts to contact Mr Harrington, to alert him about today’s inquest.

Mr O’Connor said the absence was most unsatisfactory. He said he had the power to issue a summons compelling Mr Harrington to attend but that this would be a rarely used mechanism.

Following a brief adjournment, the solicitor representing Harrington Quarries, Donal McGann, told the Coroner that his client had received no formal notification and that he had supplied a witness statement ahead of today’s scheduled proceedings.

Brian Gill, representing the family of the deceased, applied for an adjournment, so that all matters could be dealt with in one sitting.

Accepting Mr McGann’s assurance that his client would attend on a future date, the Coroner adjourned the inquest to next month.

Last February, Harrington Concrete and Quarries was fined half a million euro for breaches of health and safety legislation in connection with the death of Joseph Harrington.

The 27-year-old sustained fatal injuries when he fell around five metres from a location above the crusher, which had no physical barriers to protect those working near the machinery in question.