Inquest Into Woman’s Death Due To Penicillin Allergy 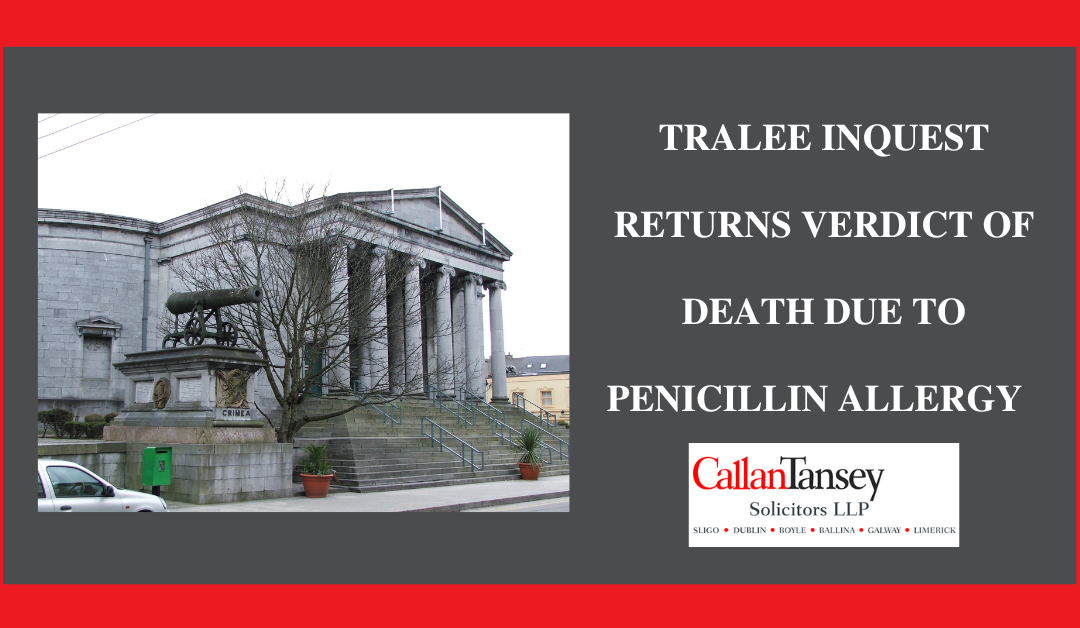 An inquest was held into the death of Mrs. Patricia Bewick at Tralee Circuit Court on July 14th 2022. Mrs. Bewick, from Tarbert, Co. Kerry  was a much loved mother and grandmother who had a penicillin allergy. She died in University Hospital Kerry on the July 17th 2019, shortly after taking penicillin prescribed at her GP practice.

Mrs. Bewick’s daughter, Anne White, gave evidence of returning home from work around 22.50pm on July 15th.  She found her mother feeling unwell, reporting that she had begun to feel unwell shortly after taking her prescribed tablet at 6pm. Her mother’s condition deteriorated, she was experiencing pins and needles in her fingers, her lips were tingling and she was finding it hard to breath, a short time later she became unable to speak.

Anne called the ambulance and shortly afterwards her mother experienced a fit and collapsed. When the ambulance crew arrived Anne explained her mother’s symptoms, showed them the tablets she had taken and told them that her mother was allergic to penicillin. At this point the paramedic administered an epi pen.  They worked on Mrs. Bewick for some time before taking her to Kerry University Hospital where she subsequently died in ICU.

Mrs. Bewick suffered from COPD and Pathologist Nollaig Parfrey, Emeritus Professor of Pathology at University College Cork gave evidence that she had an allergic reaction due to her allergy to penicillin, with emphysema being a contributing factor.

Mrs. Bewick was a patient of the Tarbert Medical Centre. Dr. Rosalie Ashley, who worked there on a part-time basis gave evidence of seeing Mrs. Bewick a number of times, but never had the penicillin allergy been mentioned.  She also said that the allergy was not flagged in the allergies section of the computerised file system at the GP practice. She also said that she routinely asked patients if they had any allergies

Dr. Dominic Lehane, who runs the Tarbert Medical Centre and had also treated Mrs. Bewick gave evidence that he was not aware that she was allergic to penicillin. When cross-examined by Alistair Rutherdale BL he accepted that there had in fact been about five letters to the medical practice from various hospitals which had clearly highlighted Mrs. Bewicks penicillin allergy.

Verdict of Death Due to Anaphylatic Shock due to Penicillin Allergy

Coroner Helen Lucey returned a narrative verdict, death due to anaphylactic shock due to an allergy to penicillin, following the ingestion of penicillin which had been prescribed.

“The family of Patricia Bewick are devastated at the loss of their much-loved mother and adored grandmother. Mrs. Bewick died of anaphylactic shock after taking penicillin which was prescribed by her GP practice. The fact she was allergic to penicillin had previously been communicated to her GP practice. The simple act of placing a warning on the front of her medical file at her GP’s office, noting her allergy to penicillin would have prevented her death.

It is vital that accurate recording of drug allergy status is clearly and prominently documented on all patient records to prevent this happening again. We call on all GP practices to ensure audits are carried out on every one of their patient files to ensure that where required these warnings are clearly flagged.  This will prevent the prescription and administration of drugs inducing allergic reactions and will improve patient safety.

No other family should have to endure the heartache this family have suffered over the past three years.”