HSE Apologises to parents after death of newborn baby 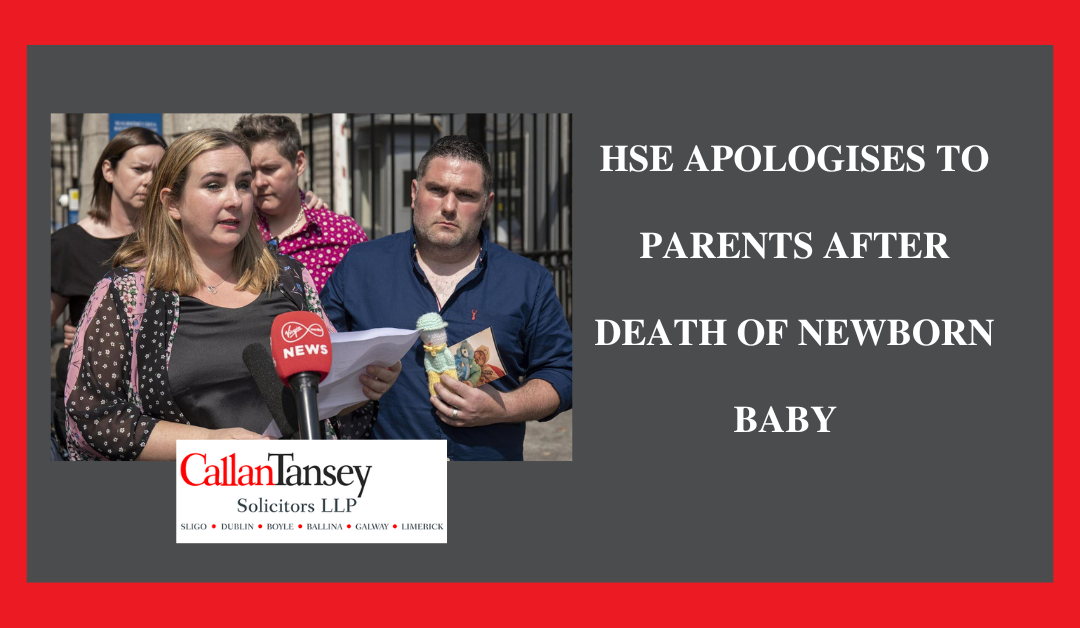 Almost five years after the death of newborn baby Danny Ryan, the HSE has apologised to his parents, Brenda and Michael.  An inquest  in June 2019 heard the cause of Danny’s death was severe brain damage due to lack of oxygen.  The case, which was before the Court for ruling on the statutory award for mental distress arising from a wrongful death, was settled for an undisclosed sum.

The High Court heard that Danny’s mother, Brenda Ryan, had gestational diabetes while pregnant.  She should have been delivered at 40 weeks gestation, but instead the pregnancy was allowed to continue until 40 weeks and ten days. Our Lady of Lourdes Hospital in Drogheda apologised for the “deficits in care” which had been highlighted in a review.

“We want to see evidence of change”

Danny’s parents Brenda and Michael Ryan, who were represented by Roger Murray S.C., gave a statement outside the High Court following the case. In it they said too many people had stood in court before them with the same experience and devastating loss. “If we had any advice for parents, it is to trust your gut at all times, “ they said. They acknowledged that so many parents were advocating for better maternity care, adding “we challenge the HSE again today. We want to see evidence of change. No parent should have to make the decision to turn of their new-born baby’s life support.”

The need for open disclosure

“The HSE needs to start with open disclosure. Even though Danny was born over four years ago, it was only on the 1st of October 2021 that the SHE admitted liability for the multiple avoidable failures during my pregnancy and Dannys birth. The apology letter made no mention of striving for better maternity care. It made no mention of the coroner’s recommendation from 2020 and it made no mention of policy reform.”

“It took us nearly five years to get justice”

“Add to this the whole legal review process to get justice for a poor helpless baby is heartbreakingly long and painful. No parents should have to be mentally assessed multiple times, attend so many review meetings and read heart breaking reports.

“It took us nearly five years to get justice. Parents can’t fight the HSE alone and it is only with the support of our family and friends that we have made it to today.”

“Our hearts will remain broken”

“We don’t ever forget that our baby son Danny is at the centre of today. We are stronger people for having met him, for having held him and we all continue to love Danny as a much wanted first baby of the family,” the Ryans said.

“Danny continues to drive us forward every day and we hope that he will help other babies too, because he became an organ donor when he donated his tiny heart valves.

“Our hearts will remain broken, although our smiles remain for you Danny and your beautiful little brothers. Thank you for choosing us Danny Ryan, we will be forever and always in love with you.”

Solicitor calls for implementation of coroners recommendations to be mandatory

When delivering a narrative verdict at the inquest in 2019, Coroner Myra Cullinane endorsed new RCSI guidelines, introduced in 2018, which reduce the length of time a woman with gestational diabetes can go over term. The family’s solicitor, Roger Murray SC said the implementation of the coroners recommendations should be mandatory, as happens in other jurisdictions.