HSE apologises over death of baby 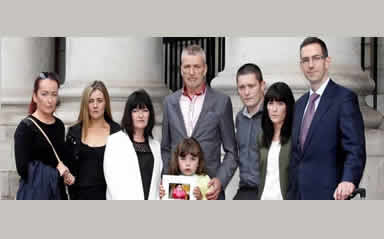 Grace McFadden, it was claimed, suffered a brain injury and had cerebral palsy, and died on Mother’s Day 2009.

Her mum and dad, brother, and sisters were in the High Court yesterday as their case against the HSE over her care was settled on confidential terms.

As part of the settlement, an apology was read in court by HSE counsel Emily Egan.
advertisement

“The staff of Sligo University Hospital wish to offer their sincere and heartfelt apology to the family of the late Grace McFadden,” said Ms Egan.

“To her parents Bartley and Mary and her siblings Luke, Nina, Stacey, Tara, and Leah for any failings in care at the time of Grace’s birth. The hospital deeply regrets the trauma and distress suffered by Grace’s family.”

Mary and Bartley McFadden, of Stonepark, Ballymote, Co Sligo, had sued the HSE over Grace’s care at the time of her birth in the Sligo hospital.

The McFaddens also sued for nervous shock, claiming Grace suffered a brain injury at birth and cerebral palsy and died at just 16 months.

It was claimed that on November 25, 2007, Mrs McFadden was admitted to Sligo General Hospital and the CTG trace was at first normal. It was claimed that after 2am the foetal heart rate on the CTG fell and remained that way for about six minutes before there was a brief recovery and then another decline.

Mrs McFadden was scheduled for theatre but it was claimed there was an alleged delay and an anaesthetic was not started until after 3am. Grace was delivered by caesarian section four minutes later, at 3.08am, on November 26, 2007. Grace was in very poor condition at birth and, it was claimed, suffered severe brain damage due to a lack of oxygen. The McFaddens were advised to have her christened.

She was transferred to a Dublin hospital and the family were advised Grace was seriously brain- damaged and quadriplegic.

Grace remained very ill during her short life and required 24-hour care and was tube-fed. She died on March 23, 2009. It was claimed her death was as a direct result of her condition.

There was, claimed the McFaddens, a failure to immediately declare an emergency at 2.15am and a failure to deliver Grace at the earliest possible opportunity. There was, it was further claimed, a failure to ensure delivery by 2.38am at the latest.

Approving the settlement, Mr Justice Kevin Cross said he hoped the apology would give some consolation to the family, but he knew nothing would compensate them for the grief and suffering over the death of Grace.

Outside court, solicitor Roger Murray said the McFaddens believed it was a meaningful apology and they sincerely hoped the HSE has learned from what happened to Grace. He said no money would compensate for the loss of Grace but the apology was priceless.