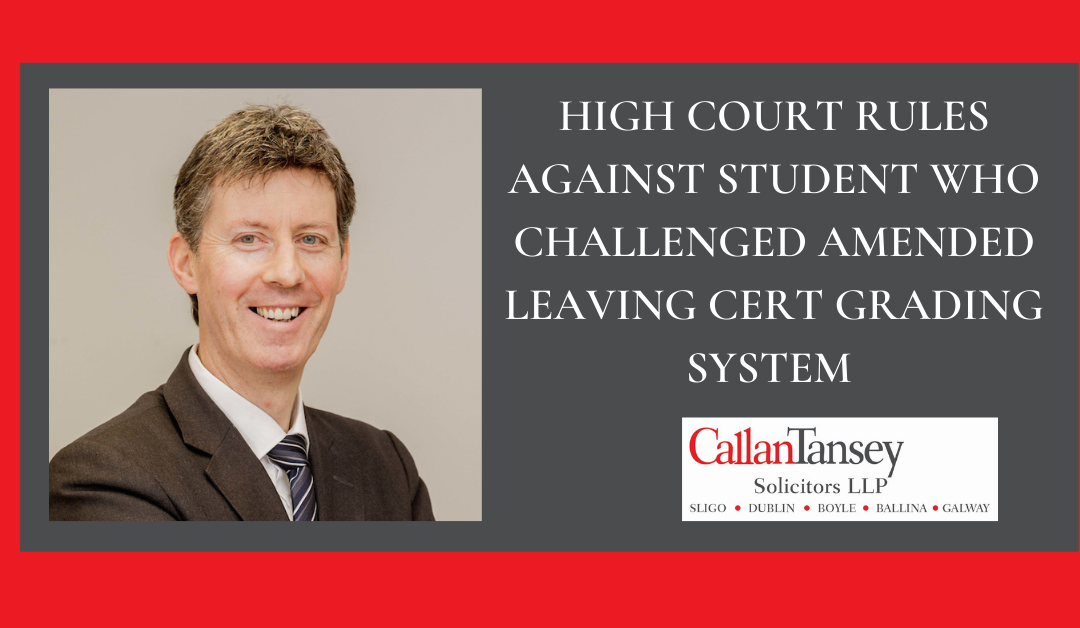 After a protracted case that involved 5 weeks of Court time over a two-month period, Freddy Sherry, a past pupil of Belvedere College Dublin has lost his High Court legal action to have the revised Calculated Grades system that was applied to his Leaving Certificate results of 2020 deemed unlawful.

Mr. Sherry’s case, which he brought by way of judicial review proceedings, was chosen as the “lead” case from a batch of approximately 60 similar cases brought by students from the Leaving Cert class of 2020 who felt that they were unfairly and unlawfully downgraded by the final grading system adopted by Minister Foley.

Mr. Sherry grounded his claim on the legal concept of legitimate expectation rather than on a breach of his Constitutional rights and/or statutory rights.

Initially, the Department had intended to apply a Standardisation Model to its calculated grading system which incorporated four metrics to produce final grades for students across the range of subjects on offer.

It will be recalled that following controversy in the UK regarding the application of its equivalent of metric No.1 above (i.e. Schools Historical Data) – which it was claimed had an unduly punitive impact on students from poorer socio – economic backgrounds – the Government here decided to make two changes to the established Standardisation Model.

(i) To exclude Metric No. 1 above in its entirety

(ii) To reduce the reliance on Metric No. 2 by not applying a particular mapping tool that was to be applied to this metric. This mapping tool, had it remained as part of the model, would have involved mapping the scores from the entire cohort of candidates for the subject in question to the historical national distribution of the scores for that subject.

It is worth noting that the revised calculated Grades Process included an initial stage whereby the students’ own class teachers gave them estimated percentage marks which were then sent on to the Department and subjected to the Standardisation Model.

Not surprisingly the teachers gave their pupils inflated percentages. It was always envisaged that these would be pared back when subjected to the rigours of the Model.

However, by tweaking Metric 2 as they did, the extent of the downgrading was lessened resulting in what Judge Meenan acknowledged was “significant grade inflation in the results of Leaving Certificate 2020”.

In a lengthy Judgement, running to some 53 pages, in which he set out the intricacies of the grading system that was eventually sanctioned by the Minister and applied by her Department, Meenan J. concluded:

(i) he failed, the Judge said, to establish that he suffered any “material unfairness” as a consequence of the said decisions and certainly no unfairness that would lead the Court to conclude that the novel grading system applied to last year’s Leaving Certificate, on foot the decisions taken, was unlawful.

(ii) Sherry failed to establish that his marks in certain subjects were “unfairly downgraded”. In this regard the Court noted that his initial estimated percentage marks submitted by his school/ teachers had in fact been “significantly inflated”

(iii) Under the new grading system, his school had held its position relative to other schools

(iv) Had data showing the historical performance of Mr. Sherry’s school been left in as one of the grading metrics – a mapping exercise carried out was able to show that there was little difference between the calculated grades this would have yielded and the calculated grades he actually received.

The case will return before the Court again next week when Judge Meenan will hear Submissions on Costs.

The rather sobering default position in Irish law in relation to costs is that…..“costs follow the event”… i.e. the loser pays not only their own costs but also the costs of the other/successful side. Judge Meenan indicated that submissions on costs ought to reflect that this was the “lead” case that has determined the central issue common to “numerous other” cases which sought to challenging a system that has, pending a successful Appeal in this case, been deemed to be lawful.

If you have any questions regarding the issues raised in this article, please contact Brian Gill, Partner, Callan Tansey Solicitors LLP BGill@callantansey.ie.