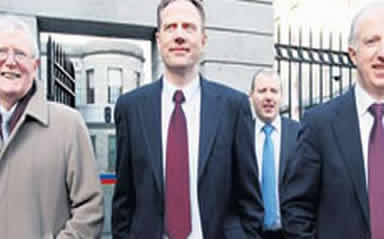 A HIGH COURT judge has found that three brothers suffered losses because an accountant deliberately deceived them concerning the purchase, involving a secret sub-sale arrangement, of a development site in Co Sligo by a company of which former European commissioner Ray MacSharry was chairman.

Mr Justice Seán Ryan ruled that accountant Kenneth McMoreland, acting in the ordinary course of business and with the authority of his partners in the Sligo accountancy firm Gilroy Gannon, induced the Grady brothers by deliberate fraudulent representations to invest €2.4 million in Foresthaze Developments Ltd to buy the Saehan development site in 2006.

The original promoters/investors of the purchase were privy to the secret sub-sale arrangement and, for a time, had “a clear expectation” that they would get a portion of the net €1.2 million gain, he found.

He adjourned to February 29th issues arising from his judgment, including what orders to make and issues concerning any possible liability of various third parties – including Ray MacSharry snr, Ray MacSharry jnr and Marc MacSharry – for the losses suffered.

Arthur, Kieran and John Grady and their company TJ Grady Ltd sued over their agreement in September 2006, via a loan from their company, to invest €2.4 million in Foresthaze to buy the site, since then “a victim of the property collapse”.

Unknown to the Gradys, a contract for the €9.85 million sale of the lands to a solicitor in trust for Mr McMoreland and quantity surveyor Jackie McMahon, acting on behalf of a consortium of investors, had been signed earlier in April 2006.

The investors incorporated Foresthaze in July 2006 and it was later decided to sell the lands to Foresthaze for €11.5 million, on grounds additional funds would be required and, if the land was sold at a higher price, there would be an immediate profit for the promoters, the judge found.

The funding shortfall of €2.4 million was eventually obtained from the Gradys on foot of fraudulent representations by Mr McMoreland including the purchase price was €11.5 million and the vendor was Saehan, he found.

Those representations induced them to invest, they would not have done so otherwise and they suffered loss.

The Gradys made the €2.4 million available on October 26th, 2006. The next day, the sale for the original contract price of €9.85 million was completed, plus the sub-sale to Foresthaze for €11.5 million. The Gradys were unaware of the sub-sale arrangement.

The Gradys alleged fraudulent claims by Mr McMoreland and Mr McMahon, a quantity surveyor, concerning purchase of the site by Foresthaze and sought damages against both men.

While he believed Mr McMahon acquiesced while Mr McMoreland misinformed the Gradys about matters at a meeting on September 11th, 2006, he ruled that the plaintiffs had not made out a case of fraudulent misrepresentation against Mr McMahon.

Under the sub-sale arrangement, it was intended a net profit of €1.2 million was to be distributed between the original promoters. However, at a morning meeting on November 17th, 2006, Mr McMoreland, then with “grave reservations” about taking the profit, proposed they should not and it was agreed to treat it as extra loans to Foresthaze.

After that 11am meeting, there remained the problem of how to explain “this windfall” to the Gradys at a Foresthaze board meeting that afternoon.

Mr McMoreland suggested saying they had got a discount on the purchase price because of chemical contamination of the site. As some chemical contamination had to be dealt with, this explanation, “although quite false”, did cohere with existing information and Kieran and Arthur Grady were the only people at the second meeting who did not know it was untrue.

Mr McMoreland’s change of heart and the agreement of the other promoters resulted in loan notes being issued by Foresthaze to the shareholders, the judge said.

There was “a further knot in the tangled web woven by Mr McMoreland and his fellow promoters” because capital gains tax on the second sale had to be paid.

This was ascribed to the shareholders, including Arthur and Kieran Grady, and Mr McMoreland submitted capital gains tax on their behalf, unknown to them. The Revenue later agreed the shareholders did not have to include “these putative gains” in their own tax returns.

The Gradys “remained in the dark” until April 2009 when a letter from Foresthaze’s auditors about apparently concealed payments by Foresthaze to a company controlled by Mr McMoreland caused unease. They sought explanations from Gilroy Gannon and learned about the sub-sale and other matters.

Mr McMoreland admitted being “influenced by greed” in aspects of this transaction which involved “grave deception” from the start, Mr Justice Ryan said. The extensive consequences showed the enormity of his “misinformation and fraud”.

The Gradys were Gilroy Gannon clients from 2001 to 2009. There was a professional relationship between Mr McMoreland and them and he had a duty to inform them fully about the transaction, but he deceived them about key aspects, including the sub-sale and that a secret profit had been agreed.

The result of the fraud was also to enrich the other investors unjustly because the overpayment by the Gradys was brought back into Foresthaze via “phoney” loans from the various investors.

Gilroy Gannon knew about the Foresthaze project and several of its personnel were engaged with it, he found. The other partners were liable in permitting Mr McMoreland’s duality of roles in promoting Foresthaze and advising and misinforming the Gradys as the firm’s clients.