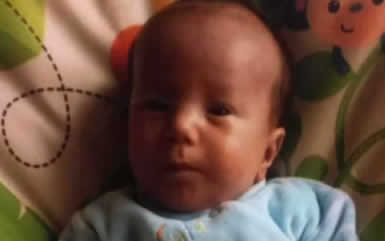 The parents of a baby boy paid tribute to their “wee fighter” who offered them “so much hope” during his short lifetime.

Baby Cormac Lafferty was born prematurely with a congenital heart condition and his progress through life-saving surgery was described by doctors as “miraculous”.

Coroner Dr Myra Cullinane returned a narrative verdict at an inquest into the infant’s death.

“He beat every target. He was a real fighter. He came home to Donegal with us and he was thriving,” Paul Lafferty said.

Ann-Marie Lafferty was staying in parents’ accommodation adjacent to Our Lady’s Hospital in Crumlin with Cormac’s twin Callum when she was called to the ward. Her son was in critical condition and she said the call “came too late”.

“That hurts. I was close by. I should have been informed my child was sick,” she said.

“Cormac was only three months old when he died on September 10 2016. He will be sorely missed by all of us,” Mrs Lafferty said.

The couple, from Castlefin outside Lifford in Co Donegal were commended for their “outstanding” care of baby Cormac by the infant’s consultant cardiologist Professor Colin McMahon.

“They did everything they could for him during his short life,” Prof McMahon said.

Baby Cormac was born with a congenital heart defect weighing 1.6 kilograms at 36 weeks gestation on June 13 2016. He defied expectations by gaining enough weight for life saving surgery. Doctors placed a shunt to direct blood from his heart to his lungs. Pediatric Cardiologist Dr Damien Kenny described Cormac’s survival as “miraculous”.

The infant was discharged home to Donegal and returned to hospital for a review on September 6. He was admitted due to concerns over oxygen saturations levels. Early on September 10 baby Cormac became unsettled after a feed. An emergency team trying to ventilate him suctioned milk from his airway. His mother was called to the ward at 6.40am. The baby was successfully ventilated on a third attempt at 6.54am but went into cardiac arrest at 7.07am. He was pronounced dead less than an hour later.

The cause of death was acute cardio respiratory arrest due to pulmonary hemorrhage in a child with Tetralogy of Fallot. Bronchiolitis and terminal aspiration of feed were contributory factors.

Barrister for the family Alan Keating instructed by Callan Tansey solicitors said the family were concerned about the loss of data from an oxygen saturation monitor following Cormac’s death.

Coroner Dr Myra Cullinane returned a narrative verdict and said she would contact the hospital in relation to the preservation of data.

After the inquest, the Lafferty’s said they felt more could be done by hospitals to retain digital data.

“We do not feel we got all of the answers we were looking for. We feel more should be done to ensure digital records are retained and that statements are taken from witnesses before they leave the jurisdiction, especially where a coroner’s inquest may take place.”

Article as appeared in The Independent, 28 November, 2018, by Louise Roseingrave