‘He only had two days in this world, no words can express my grief’ 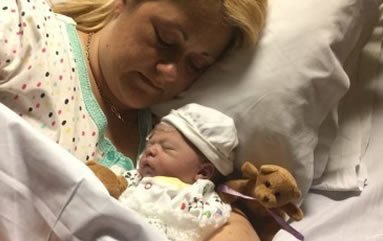 A WOMAN WHO lost her newborn son weeks after her husband died suddenly has settled her case with the HSE.

The little boy, named after his father who died of a heart attack when Sandra was five months pregnant, would be three years old if he was still alive.

“This has been a long and hard road to get answers. I lost my husband before Christmas 2014 and a few months later our baby Stevie was taken away.

“Today, Stevie would have been three years and 17 days old. He only had two days in this world. No words can express my grief,” Sandra said.

Speaking after the conclusion of her medical negligence case, she called on women to speak up and demand answers from the HSE. She said the process of “dreadful communication” with the HSE added to her distress following the loss of her baby.

“I know that they knew from the beginning it was due to negligence. They didn’t admit that until just before the inquest. They knew all along that they didn’t monitor me or Stevie. They were just hoping I’d get tired, that I’d get fed up and give up,” she said.

Sandra engaged with solicitors Callan Tansey, who helped her get answers.

“I would encourage all women and families to insist on answers and not be afraid of asking the tough questions. Demanding information and speaking up are the only ways to bring about change,” she said.

Stevie suffered a lack of oxygen to the brain shortly before birth and died on 30 April 2015. An inquest into his death returned a verdict of medical misadventure.

“Stevie was my last chance to have a baby with Stephen, I am utterly devastated,” Sandra said at the Dublin Coroner’s inquest last November.

The inquest heard that Stevie was being treated as a “precious baby” because of the recent death of his father.

Sandra had been allocated a private room in the postnatal ward. However, she was left alone for 90 minutes before staff returned to find her in advanced labour.

The loss continues to affect her every day, Sandra said:

“You get up in the morning and you should be getting up to a baby and you’re not. Chloe (Stevie’s older sister) should be enjoying time with her brother and she’s not.”

“I should be enjoying him growing up and I’m not. We should be putting his name down for schools and football training and we’ve lost out on all of that.”

Mullingar Regional Hospital apologised to Sandra for the “deficits in care” identified as part of a review into the case and confirmed that all recommendations have been fully implemented.