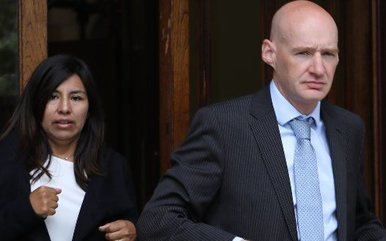 The president of the High Court has approved a further payment for a young girl with cerebral palsy, bringing to €3m total payments agreed to date under a settlement of her case over the circumstances of her birth at Our Lady of Lourdes Hospital, Drogheda.

Ruary Martin, father of six year old Milagros Martin, told Mr Justice Peter Kelly it is “wrong” and a “legislative failure” that cases of catastrophically injured children like his daughter stil have to come before the courts.

His daughter suffers from seizures and the latest bout of tests carried out on her for the purpose of assessments of her needs for this court hearing triggered a seizure, he said.

He had no issue with counsel or the courts but he considered it was not appropriate and it was wrong that, due to “ongoing legislative failure”, families have to keep returning to court for such stressful applications.

Mr Martin had in 2015 called for the establishment of a duty of candour in such cases and for the then Minister for Health, Leo Varadkar, to set “a real date” for such legislation.

Mr Justice Kelly agreed it is a “horrible” situation and noted such assessments require a child to undergo a “battery” of tests by various medical specialists, physiotherapists and speech and language therapists among others.

The “only good news” is the necessary legislation providing for payments to meet the life long care needs of catastrophically injured persons has been passed although not yet commenced, he said.

Noting the legislation was introduced some seven years after it was recommended by a courts working group, the judge said he hoped it will be commenced before the case returns to court in five years time.

He wished the family the best in the meantime, he added.

The judge made the comments today when approving an application by Des O’Neill SC for a further interim payment of some €1.1m to meet the child’s care needs until 2023.

The settlement was reached followed a day long mediation between the sides.

The €1.1m payment follows an earlier payment of €1.9m agreed under a 2015 settlement of the child’s case against the HSE over the circumstances of her birth at the Drogheda hospital.

As part of the settlement, the hospital apologised before the court in 2015 “sincerely and unambiguously” to the Martin family for the “deficits in care”, saying “all staff regret the outcome of this tragic case”.

Through her father, of Clonard Court, Balbriggan, Co Dublin, the child sued the HSE alleging negligence in the circumstances of her birth at the hospital on December 11th 2011.

Liability was admitted in the case in 2014.