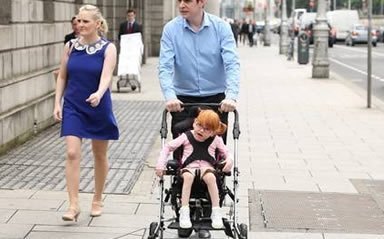 The High Court has approved an interim settlement of €1.3 million in the case of a four-year-old girl who was brain damaged at birth.
Sarah McFeely from Lismonaghan, Letterkenny, Co Donegal sued the Health Service Executive through her mother Bronagh Colhoun for negligence and breach of duty.Ms Colhoun said she was given an excessive amount of a drug used to stimulate labour, which caused her baby to be brain damaged.There were also deficiencies in the delivery of the baby and in the care she received immediately after birth at Letterkenny General Hospital on 28 September 2008.

The court was told Sarah suffered cerebral palsy and is severely disabled as a result.

The legal action was launched when Ms Colhoun tried to get an explanation for her daughter’s condition, but was refused a meeting with medical staff.

An interim settlement was reached in the case and was approved by the High Court.

The case has been adjourned for three years, when it is hoped a statutory scheme will be in place to allow for further periodic payments.

Mr Justice Sean Ryan said it was a very good settlement for Sarah. He said while money would not solve the problems, the absence of it could make things a lot worse.

Afterwards, the family’s solicitor said they were pleased with the settlement, but disappointed it had taken so long for the HSE to admit liability.