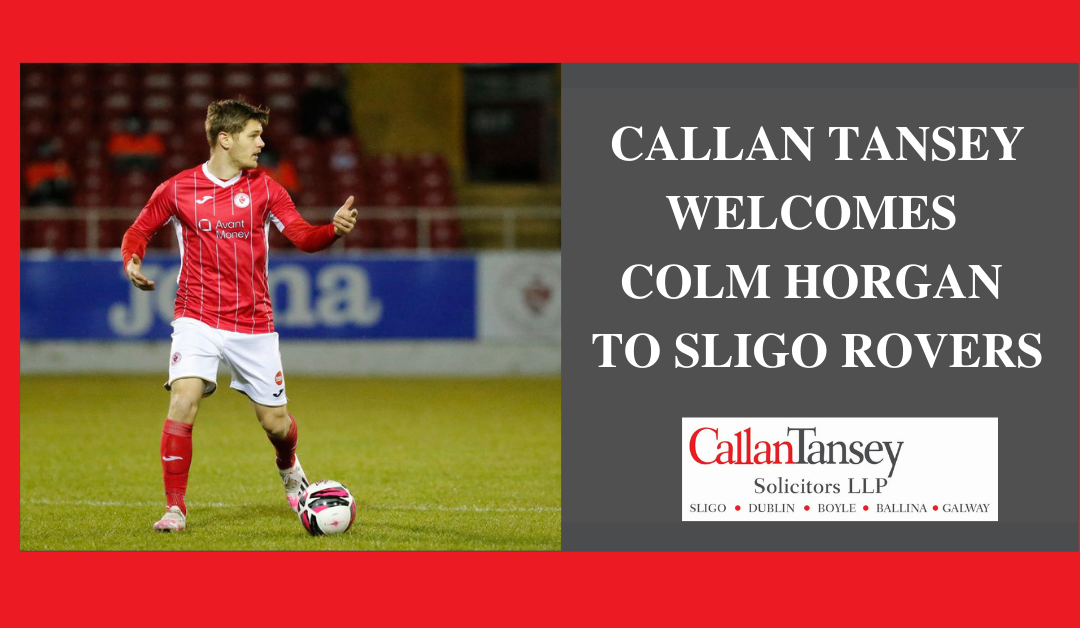 As part of our support for Sligo Rovers, Callan Tansey Solicitors is the player sponsor for Colm Horgan for this season.  We sat down with Colm, to welcome him to Sligo, learn a bit about his career to date and to help introduce him to the wider community.

Welcome to Sligo Colm, we hope you are settling in. To start off can you tell us a little bit about your early life and how you came to choose a career in soccer.

I am from Salthill in Galway and went to school at Colaiste Einde there. As a child I played soccer and GAA and was lucky to have a strong team in my age group in both sports. Our Salthill Knocknacarra GAA team got to the Feile final, where we were beaten by Kilmacud Crokes, that was the last game I played, I had to choose which sport to focus on and for me that was soccer. I had started playing soccer with Salthill Devons then Galway Town and played in The Kennedy Cup with them. Perhaps I chose to concentrate on soccer because my Dad coached me, but the fact is I enjoyed it more. Following Galway United’s promotion to the Premier Division after the 2014 season I made the First Division Team of the Year.  This was voted by my fellow players so really meant a lot.

You are a defender Colm, playing right back, when did you settle into that position and what qualities do you feel a good Defender needs?

I suppose I was about 15 or 16 and had begun to play with the Men’s team. As a Defender you need to be able to read the game, to have a good sense for danger, to spot where the threats are coming from. It’s important to study the opposition, try and understand the tactics they may use and be intelligent about how you approach the game.

In recent years you have played with Galway United, Cork City and Derry City. What made you decide to sign with Sligo Rovers?

I have always heard good things about the Club, my brother played here for a year and I have had a number of friends play here over the years.  Liam has a great reputation and when the opportunity came up to join Sligo Rovers, and work with him, I was delighted to take it.

What are you looking forward to as you start your time with Sligo Rovers?

I suppose we are all looking forward to the opportunity to play in Europe, though not sure how that is going to happen this year. Apart from that to do my bit to make sure Sligo Rovers has another successful season.

We wish Colm, and the rest of the team the very best of luck this season and look forward to being able to cheer them on from the sidelines before too long.