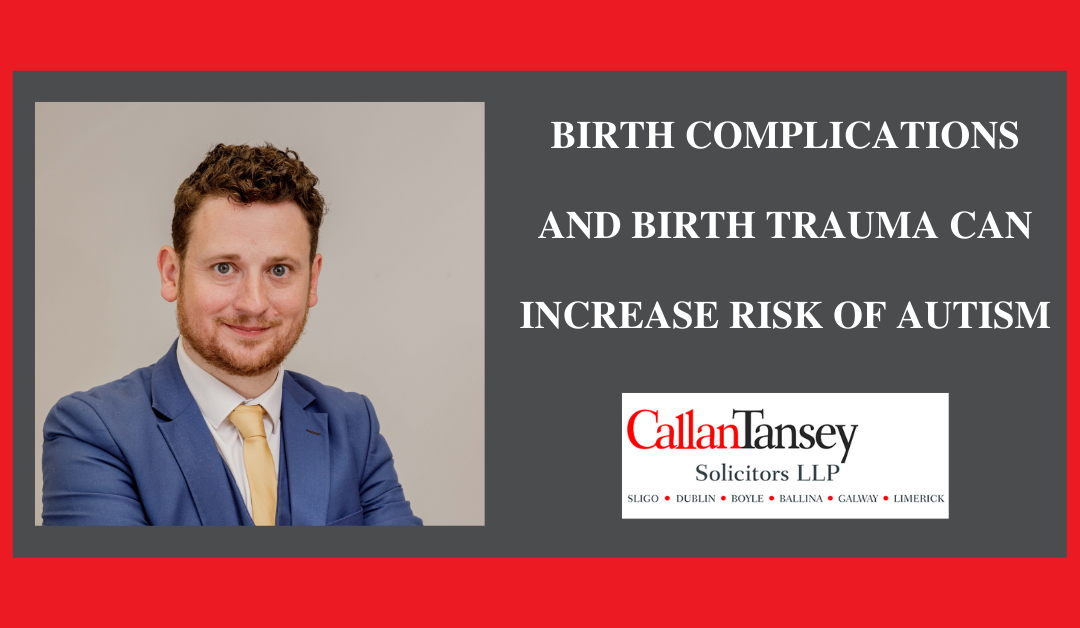 For only the second time ever a child with Autism ,who sued the National Maternity Hospital over the circumstances of his birth, has settled his High Court Action.  Here David O’Malley  Partner in our Medical Negligence Department, discusses recent research into links between birth trauma and increased risk of Autism and resulting clinical negligence case investigations.

Research into causes of Autism

Over the past decade there has been increased scientific evidence showing that perinatal and intranatal trauma are significant risk factors for developing autism. The first empirical breakthrough in that rega8rd was a South California cohort Study published in 2017 which examined the interrelationship between birth trauma and the risk of developing autism.

The article, “Association of Perinatal Risk Factors with Autism Spectrum Disorder” discusses a study involving the analysis of birth records of children born at Kaiser Permanente facilities during an 18 year period, from 1991 through 2009. Of that study group, approximately 6,000 children were ultimately diagnosed with autism spectrum disorder.

After looking deeper into the birth records of those 6,000 children, researchers discovered that nearly 40 percent of these children suffered complications either shortly before or during birth. The complications researchers found to be most closely related to autism included birth asphyxia and preeclampsia. This research has in turn led to more clinical negligence case investigations.

The first test case in this jurisdiction and indeed the common law world was that of “ Finn Phillips v NMH”  In June 2019 this case was settled by mediation where Mr. Justice Kevin Cross was happy to endorse a settlement of €7.25 million for a child that developed autism following a traumatic birth.

The boy was delivered by ventouse delivery and it was alleged that he was unnecessarily exposed to both asphyxia and trauma from the vacuum extraction. His Lawyers argued that this led to potential long term consequences. The injuries suffered, it was claimed, included developmental delay and autism. It was claimed that there was a failure to manage Finn’s mother’s labour appropriately and an alleged failure to intervene in time.

Whilst this case is not a strict precedent as each case has its own facts it is landmark in that it was a case relating to autism arising from a birth injury that was settled for a very significant sum.

Now a second case against the National Maternity Hospital has been settled  for €10 million, following an eight year battle. Ashton Shiels Flynn, through his mother Michelle, sued the NMH over the circumstances of his birth. The court heard it was only the second case to come before the courts seeking to establish an alleged link between autism and alleged hypoxic event during delivery.

As scientific research progresses causation factors will become a lot clearer and it seems likely that there will be a lot more of these type of cases as families investigate causation of autism and developmental delay.

According to David O’Malley, who recently attended a clinical negligence conference in the UK on the issue, “the main burgeoning areas of alleged negligence areas linking autism to birth would be preeclampsia, failure to intervene in delivery, instrumental delivery and delay in undergoing c-section”.

It remains be seen how the Law fully develops but the case of Finn Phillips has shown that science is being listened too and causation arguments are holding sway with regard to the interrelationship of birth injury linked to autism.

It is important for any family with an autistic child who also has concerns regarding their birth to seek answers as recent research is showing a clear correlation between the two. It really is a matter of getting expert advice from a team of medical experts to identify any breaches of duty during delivery leading to increased risk of autism.

What Can the Families of Autistic Children Do?

Our understanding of Autism can only be enriched by a true inquisitorial process in every circumstance. Autistic children and their families deserve nothing less than a forensic approach based on all available science.

David O’Malley is a Partner at Callan Tansey Solicitors LLP in the Medical Negligence department. If you have any questions about the topics addressed in this article or would like further information you can contact David O’Malley at DOMalley@CallanTansey.ie