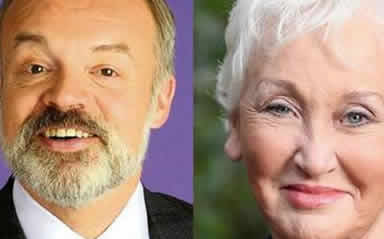 The Sunday Independent understands that legal correspondence has been sent by Ms Prone, through the top legal firm Callan Tansey, over the remarks Norton made to an estimated four million listeners on his radio show on BBC2.

Ms Prone, who is one of Ireland’s best-known media and political advisors, was mistaken by the presenter for Terry Keane – the former Sunday Independent columnist and a long-term love of Haughey.

Ms Prone is married to Tom Savage, founder director of the Communications Clinic and former chairman of the RTE Authority, for 41 years.

The show, which aired on St Valentine’s weekend, prompted at least one listener to text the programme flagging the mistake. However, the comment was not corrected and the show – naming Ms Prone – remained on the BBC website the next day.

On February 22, nine days after the programme had first aired, the BBC finally issued a correction.

A statement on their website read: “During a live discussion on the Graham Norton radio show on 13 ­February 2016 an incorrect name for the ­girlfriend of the former Irish Taoiseach, Mr Charles Haughey, was stated inadvertently.

“We would like to clarify that the late Ms Terry Keane ­publicly admitted to being Mr Haughey’s girlfriend. We apologise for this error.”

Speaking in 2010 about mix-ups with her namesake, Ms Prone wrote: “I’ve been dogged for more than 20 years by the rumour that I was Charlie Haughey’s mistress, based on the fact that his real mistress, Terry Keane, shared a first name with me.”

Detailing an incident at a social function, Ms Prone wrote: “Once, at a party, a man nudged my husband, pointed across the room at me, and muttered ‘Charlie’s mistress’. My husband acted surprised and asked for details. He got them in spades. When the poor rumour-seller ground to a halt, my husband shook his head wonderingly. ‘Never knew that,’ he said. ‘Did you know she’s also my wife?'”

Ms Prone explained: “He was immediately sorry, because he thought he was going to have to do CPR on the poor guy, so he took him off the hook by explaining the coincidence of names. Not that clearing up the facts always clears up the image.”

Showing the harm caused by the rumour by citing another incident, Ms Prone wrote: “One of my younger employees mentioned to me a couple of weeks back that her granny, watching me on Vincent Browne’s ­programme, opined that she’d never liked me because of my affair with Haughey.

“Her daughter and grand- daughter explained that I’d never had a relationship with CJ and how the myth had started.”

She added: “Scandal, you see, sticks like superglue. Even if you’ve never done anything scandalous.”

The affair between Terry Keane and Charlie Haughey came to public attention in May 1999. In a watershed moment on Irish television, Keane, the long-time love of the ­controversial politician, spoke of their 27-year affair.

Confirming what many ­politicians and journalists already knew or at least ­suspected, she said the pair had engaged in a near three-decade affair.

It was understood she was jump-started into a confession, which she subsequently regretted.

In 2006, she reappeared on The Late Late Show to say she regretted exposing their affair in such a public fashion.

But in many ways Keane was so much more than a mistress.

She was as good as publicly recognised. Charlie’s inner circle knew all about her and his wider social and political circles were intrigued by her.

Indeed, rather than just a lover, she provided the former Taoiseach with sage counsel and was also privy to great State secrets – a fact that was largely lost in a recent RTE drama on the controversial politician.

Keane died at the age of 68 in 2008, following her own battle with cancer.

Neither the BBC nor Ms Prone would comment when contacted by the Sunday ­ Independent.