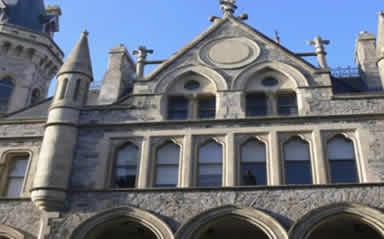 A Ballina woman suffered neck and shoulder injuries as a result of a low impact rear collision to her car, a sitting of Circuit Court has heard. As a result of the collision, Ms. Bernadette Maughan, 28 Roches Terrace, Ballina, took a case for a damages against the driver of the other car, Ms. Mary Caulfield, 2 Nephin View, Creggs Road, Ballina. At last week’s court, Judge Terence O’Sullivan assessed damages in the sum of €24,040, plus costs.

The collision occurred on a ‘miserable, dark, wet’ evening three years ago, November 22, 2007, the court was told.
The plaintiff, represented by Mr. Peter Daly, B.L. (instructed by Callan Tansey, solicitors), said she had her three children in the car when, as she was stopped at lights on Howley Street, Ballina, a car collided with the back of her vehicle.

She was taken to hospital but was in a panic more for her children than anything else. However, when she got home she experienced pain down her left side, a burning sensation in her neck and soreness in her left shoulder. She was prescribed painkillers by her doctor.

She would experience headaches while driving, which she had to do for work. Her work subsequently changed to a more office-based role.

Ms. Maughan said she made a relatively good recovery.

Under cross-examination by Mr. Gerry Bourke, B.L. (instructed by Harrison O’Dowd, solicitors), representing the defendant, the plaintiff agreed the damage done to her car was minor.

However, Judge O’Sullivan made reference to an Australian study that illustrated how a small impact can give a car’s occupants, who are not expected it, quite a jolt, sometimes more so than a bigger impact which can be absorbed somewhat by a car’s frame.

Ms. Caulfield said she was the fourth car back from the lights on Howley Street. When they turned green the cars in front, including Ms. Maughan’s, started moving. However, the plaintiff had just gone through the lights when she stopped really suddenly.

Witness said she hit the brakes hard but skidded a little and just literally tipped the car in front. She was expecting the driver in front to drive on but she got out of the car, looked at her for a few seconds, and then got very dramatic.
There was damage to the back bumper of Ms. Maughan’s car but Ms. Caulfield said she couldn’t have caused it because of the shape of the dent in the bumper and the fact that her car didn’t have any damage to it.

A garda witness, who produced a sketch of the scene, said Ms. Maughan’s car had just about gone through the lights on the ‘miserable, dark, wet evening’. She felt the mark on the bumper of the plaintiff’s car was not caused in the collision.

It was dark, however, Judge O’Sullivan pointed out. He said the defendant’s account of the collision was the more likely correct and the impact happened just after the lights, not before.

But she had been injured in the accident and was entitled to make a case. She suffered injuries to her neck and left shoulder that were ‘quite significant’ and interfered with her day-to-day living. He made a decree for €24,040, plus costs.